Is this where Klinsmann is playing now?

Having the best weather we attend a wonderfull two day Open Air concert with many top acts.

Setlist: Immigrant/Wanton Song, Heartbreaker into Bring It On Home, Thank You, No Quarter, Gallows pole, Yallah, Since I’ve Been Lovin You, The Song Remains The Same, Friends, Calling To You / Light My Fire / Dazed & Confused / Break On Through, Four Sticks, In The Evening / Carouselambra

Review: Yesterday I saw P&P in Munich. And as the two concerts before it was a very good concert. But in my opinion the best German concert was the one at Lüneberg. They played as the last band before Elton John. Because of the very fine weather they were in a very good mood. Plant wore short trousers and Jimmy played in a white T shirt. Again they left the stage without playing an encore through the crowd was really wanting it. I think that is not okay. Because in Schwalmstadt and Munich they were really well accepted and the crowd wanted more!!! Nevertheless it was a great gig again and I hope they will keep playing on together after the tour. Funny to see was how the band left the Olympic Stadium. Robert and Jimmy drove with a VW van while Nigel Eaton had to ride a moped! 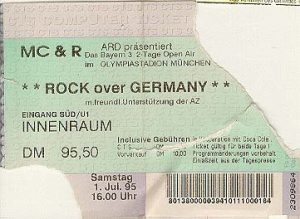